How to create Waterfall Chart in a minute?

A waterfall chart is also known as Stacked Column Chart, Bridge Graph. It is a quick way to provide a great visual representation for positive and negative values. The bars in a waterfall chart can grasp the attention of the audience. But, creating waterfall chart is little difficult in older versions of excels such as Office 2007, Office 2010 & Office 2013. Yes, it consumes little more time for a long data visualization. But in Office 2016, there is a dedicated option for waterfall chart. It is really a handy feature for users like us who work in such industries.

As I explained above, the people have to spend around 30 to 40 minutes to develop a chart with 15 to 20 data sets. Little time consuming, right? So, the Office 2016 is really a happy news for everyone.  Okay without wasting any more time, let’s learn this new feature now.

How to Create Waterfall chart in Excel 2016?

We are going to create a waterfall char with the given data, which explains the year on year profit / loss status. 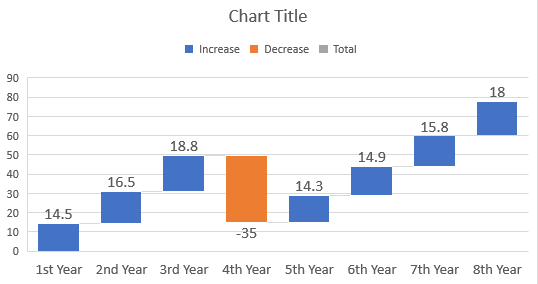 Look at the chart now.  A step by step representation is perfectly plotted in a single click. As I told, it is not this much easy with older versions. Do remember that I am using Office 2016 with office 365 subscription, which is the latest version now.

Chat
1
Join
Powered by
PrabasTech Welcome you.
Would you like to join a course?